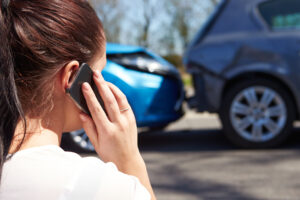 Often when you think of rear-end car accidents, you picture drivers exchanging information after a fender nudged another car’s bumper, and a few minutes later drivers go on their separate ways. It is true that some rear-end collisions are minor and end with little to no damages or injuries, but some rear end collisions are much more severe and end up with totaled vehicles and major injuries, even death. Rear-end collisions are also known as whiplash accidents because whiplash injuries are common when a motionless vehicle is suddenly struck from behind. Whiplash can be tricky because a car occupant may feel fine immediately after being rear ended, but then symptoms may start to creep up in the following few days. A Dallas rear-end collision attorney has experience handling injury claims where a person’s injuries surface days or weeks after an accident.

So you may be thinking, since you were the one rear-ended it is automatically the other driver’s fault, right? That common misunderstanding of rear-end accident fault is not accurate. Texas is what is known as a modified comparative fault state, meaning you are permitted to recover damages from a car accident if you were less than 51% at fault, but your damage total will be reduced by your percentage of fault. For example, if your total damage amount is $100,000 and you were 30% at fault, your damages will be reduced by 30% leaving you with a $70,000 recovery.

A common rear-end collision defense is that the lead driver stopped suddenly without warning and the second driver had no time to prepare or react. And this is why you need to be extremely careful if you are interviewed by the other driver’s insurance company. Their interview may be designed to find some fault to allocate to you and they may use your answers to do just that. Call a Dallas car accident attorney at the Law Office of Dorothy Hyde who has extensive experience in dealing with insurance companies and will work to see that you are fully compensated for your injuries.

Determine Your Recovery Options with a Dallas Rear-End Collision Attorney

Rear-end collisions can cause damages and injuries for which you may seek recovery including the following:

A third type of recovery that is sometimes available in Texas is exemplary damages, sometimes known also as punitive damages. Exemplary damages in Texas are designed to punish an at-fault party rather than to compensate the plaintiff for damages and injuries. Exemplary damages are capped by Texas law and sometimes awarded in cases where a driver is shown to be grossly negligent or to have operated with malice. Contact the Law Office of Dorothy Hyde to set up a consultation with a Dallas Rear-End Collision Attorney to help examine your case and explore your recovery options.