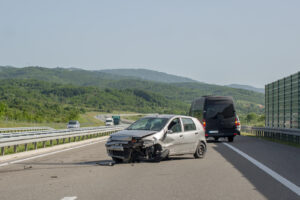 Have you ever been cut off by another vehicle making an unsafe lane change? Then you probably know how annoying it is when another car swerves into your lane without signaling its intention to change lanes or when the maneuver is not safe to execute.

According to estimates, unsafe lane changes account for nearly 10 percent of all car crashes in Texas and all across the U.S. – that’s about 530,000 car accidents caused by illegal lane changes each year.

While it is true that motorcyclists and bicyclists are more likely to become victims of motor vehicle accidents caused by unsafe lane changes (because of blind spots), drivers of passenger cars are just as likely to get injured or even die in car accidents caused by another vehicle negligently changing lanes or merging into another lane when the maneuver is not safe to perform.

“Unfortunately, as the number of vehicles on Dallas roads and highways keeps rising each year, and with the traffic congestion in and around the city getting heavier by the year, the number of crashes caused by unsafe lane changes is rising proportionately,” says our Dallas unsafe lane change accident attorney at Law Office of Dorothy Hyde.

“What can possibly go wrong when a car performs an unsafe lane change?” some of you might wonder. That depends on how the situation unfolds. When a driver performs an illegal lane change, it can lead to one of the following consequences:

Car crashes resulting from unsafe lane changes are caused by one or several of the following dangerous driving behaviors:

In Texas, it is against the law to change lanes unless it is reasonably safe to execute the maneuver. “If the other motorist failed to use turn signals or failed to otherwise alert you of his or her intention to change lanes or if the maneuver was not safe to perform, that motorist may be required to compensate you for your resulting losses and damages,” says our experienced unsafe lane change accident attorney in Dallas.

However, it may be difficult to determine fault in the event of a car crash caused by an illegal lane change, which is why it is advised to speak to a lawyer to not only establish fault but also determine the value of your personal injury case. Speak to our lawyers at Law Office of Dorothy Hyde by calling at (214) 883-1700 and receive a free case evaluation today.