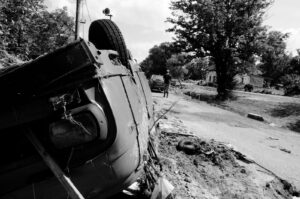 Rollover accidents can be quite horrific, leading to serious, life-altering injuries and even death. These types of accidents often happen in a split second, and they tend to have a high rate of fatalities and leave behind significant bodily injury. Most of the time, rollover accidents involve vehicles with a high center-of-gravity, such as a van, SUV or truck, although there is generally another factor that contributes to the rollover, such as a defective design or a faulty or dangerous part. It is usually the case that the driver of vehicles involved in rollovers have no clue that their vehicle has a problem until they find themselves dealing with the aftermath of the rollover. The Law Office of Dorothy Hyde has a reputation of fighting for the rights of accident victims, and if you have been involved in a rollover accident, a Dallas rollover accident attorney can help.

The Anatomy of a Rollover Accident

There are several reasons why rollover accidents can be so deadly. When a rollover occurs, the roof is generally impacted and may cave in, crushing the driver and passengers inside. Windows may burst, sending glass and debris throughout the cabin of the vehicle. The vehicle’s sides are impacted during the roll, often crushing in and causing serious bodily harm. The number of times the vehicle rolls over can contribute to the severity of any injuries, since the structure of the vehicle becomes weaker the more times it hits with violent force against the ground or other objects—so with each roll, the damage to occupants grows greater. Occupants are often ejected forcefully during the roll, which can cause a range of injuries from traumatic brain injury to spinal cord lacerations and other catastrophic injuries.

Even the safest drivers are subject to be involved in an accident. A driver can follow all the rules and do their best diligence to stay safe on the roadway only to be confronted by the actions of others on the road, such as drunk or inebriated drivers or reckless drivers. If a vehicle is impacted on the side hard enough by another vehicle, a rollover can occur. A vehicle cutting off another vehicle in traffic can result in sudden actions by the cut-off driver, leading to deadly swerving and subsequent rollovers. Tire failure can also cause a rollover.

Recover Compensation With the Help of a Dallas Rollover Accident Attorney

If you have been involved in a rollover accident due to someone else’s action, then you may be able to collect damages and hold the at-fault party accountable. Compensation may include medical costs, both present and future; lost wages; diminished capacity to earn a living; pain and suffering; mental anguish; and property damage. If you are the spouse, child, or other beneficiary of someone who lost their life in a rollover accident, you may also be able to lodge a wrongful death claim against the at-fault party.

Contact Dallas car accident attorney Dorothy Hyde and her legal team now to weigh your options. Schedule a free, no-obligation case review and consultation to get the ball rolling in your rollover accident claim.