From speeding, tailgating, and texting while driving to running red lights and swerving in and out of traffic lanes… These and many other driving behaviors constitute reckless driving, all of which 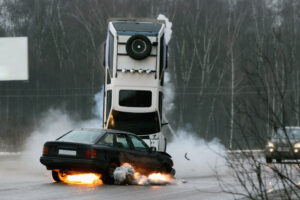 put the “reckless” driver and other motorists at a heightened risk of injury and death.

Reckless driving is said to be responsible for about a third of all traffic fatalities on U.S. roads. Unfortunately, if you drive around Dallas or any other city in Texas and look at other motorists, you will notice that reckless driving is all around us. No wonder why Dallas has some of the most dangerous roads in the nation…

“When someone gets hurt by a reckless driver, the injured party may be entitled to financial compensation, while the reckless driver will be held accountable for his/her actions both in the criminal and the civil court systems in Texas,” says our Dallas reckless driving accident attorney at Law Office of Dorothy Hyde.

Recklessness vs. carelessness: what’s the difference?

Before you actually sue someone for causing your injury due to reckless driving, it is important to understand what constitutes reckless driving in our state. Under Texas law, reckless driving is defined as operating a motor vehicle with willful or wanton disregard for the safety of other people and/or their property.

More often than not, a reckless driver is fully aware that his or her actions pose danger to others but engages in that conduct anyway. Many people often confuse the terms “careless” and “reckless,” but these two types of conduct are two completely different things, because a careless driver is the driver who makes mistakes due to carelessness and these mistakes endanger other motorists and pedestrians but that driver is no purposefully putting other people at risk of injury or death.

Reckless driving in the criminal vs. civil system

Our Dallas reckless driving lawyer explains that although both the criminal trial and civil lawsuit are based on the same conduct, these two cases will not be dependent on the results of each other. Therefore, if a driver is found guilty of reckless driving in a criminal court case, this will not automatically translate to your victory in a personal injury lawsuit.

The same can be said about a civil lawsuit. Just because your lawyer has proven that the reckless driver is responsible for your injury in a personal injury lawsuit does not necessarily mean that the driver will face criminal charges. In other words, the criminal and civil systems operate independently of each other, largely because they require different standards of proof.

If your car accident attorney can prove that the other driver was reckless in the course of a personal injury lawsuit, you may be entitled to receive punitive damages. In many cases, punitive damages are higher than the amount of compensation needed to cover your medical bills, loss of income, and other tangible losses.

Punitive damages intend to punish the reckless driver for his or her wrongful behavior and discourage him/her from engaging in that conduct in the future.

Speak about your particular case and let our attorneys from Law Office of Dorothy Hyde determine whether or not you are entitled to punitive damages as well as calculate the value of your case. Schedule a free consultation by calling our offices at (214) 883-1700.